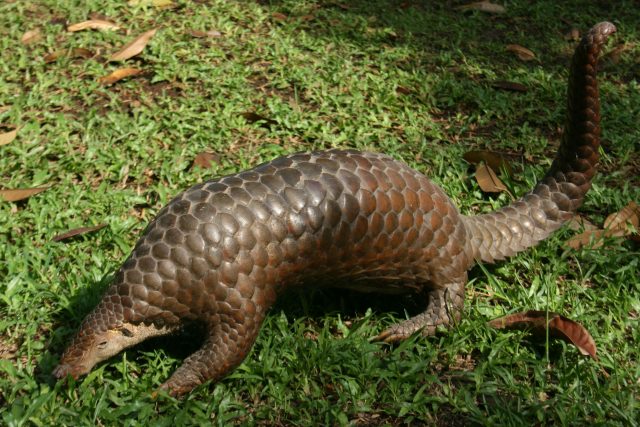 Pangolins are one of the most harmless creatures on the planet and are often named “scaly anteaters”. They can be identified by their unique, tough overlapping scales. The life-span of a pangolin is currently unknown in the wild, however in captivity they have lived for up to twenty years. To survive, the burrowing mammals simply eat termites and ants by utilizing their extremely long and sticky tongue. When they are threatened by a predator they will curl up tightly into a ball so only their tough scales are visible. This protects them from many creatures which helps them survive in the wild, however it is humans who are wiping them out. There are eight different species of pangolin which are found throughout Asia and Africa. Illegal poaching has made these incredible creatures among the most endangered mammals on the planet.

Pangolins are actually being literally eaten to extinction because of the increased demand for their meat among restaurants in China. Along with this their scales have been used excessively in Chinese medicine. The Red List have updated their database recently and moved all eight species of pangolins to the threatened status. It is a shame as these creatures are the only mammals on the planet with scales making them incredibly unique.

Experts from the Zoological Society London have reported that the demand for pangolins in Asia is so large that poachers are actually now hunting in Africa where four of the species are found. There have been many arrests made as evidence proves there is indeed an underground trade in pangolins between Asia and Africa. More than one million pangolins have been killed in the wild by poachers in this last decade which infamously makes them the most illegally traded mammal on the planet.

Out of the eight species in the world it is the Chinese pangolin and Sunda pangolin which are now the most endangered. The two species have been listed as critically endangered by the Red List. The Indian and Philippine pangolin are both listed as endangered making them incredibly vulnerable to extinction. The four African species are not as endangered yet, however they have been moved from the ‘least concern’ section to the ‘vulnerable’ section. Therefore we need to act now and protect them before they do become critically endangered.

It is never a nice feeling knowing that a species may become extinct so penalties should be put in place to deter poachers. The pangolin are fascinating creatures causing no harm to society and should therefore be protected. They are nocturnal animals so the exact population is hard to estimate. All we know is they are gradually being wiped out by the human race.