The largest creatures to have ever roamed the Earth were obviously the dinosaurs. However, did you know that in the prehistoric era nearly all animals could dwarf their modern day counterparts? These extinct relatives were a lot larger, and way more vicious and ferocious than what we’re familiar with.

Here are the top 10 giant prehistoric ancestors that make their descendants today midgets.

The King Kong of the Prehistoric era was the Gigantopithecus. Existing as recently as 100,000 years ago, it was without doubt the largest ape to have ever lived. At 10 ft tall and weighing close to 1200 pounds, its closest relative the Orangutan is significantly smaller.

Unlike Ostriches and penguins, these flightless birds pretty much terrorized everything in South America until about 2.5 million years ago. They used their giant beaks to rip flesh off their victims. In fact, they were the apex predator of the region, and stood at 1-3 meters tall.

The sloth may be slow and non-threatening, but its ancestor was the complete opposite. Megatherium was a giant sloth weighing up to 4 tonnes and close to 6 meters in length. It moved on four legs, but could go bipedal in order to reach leaves from tall trees.

Once upon a time, there existed an eagle large enough to make a meal out of a human. The Haast’s eagle, largest eagle to be known to have ever existed, weighed close to 36 lbs and had a 3m wingspan. In flight it could reach speeds of up to 50mph.

Arctodus was the Short faced bear, but there was nothing short about it. It weighed 900kg and when it stood on its hind legs, it reached a 4.6m height, making it the largest mammalian predator to have ever lived.

There may be a lot dispute about the largest snake n the world today, but there sure isn’t any about the largest snake to have ever existed-the Titanoboa. This giant beast lived some 59 million years ago and clocked length of 13m and its weight reached over 1100 kg. With such bulk, it relied on a diet of crocodiles and turtles to fuel it.

The wooly mammoth isn’t the sole ancestor of the modern day elephants. Go back further into the prehistoric era and you’ll stumble upon the Deinotherium.

They may have the crown of being today’s largest land animals, but elephants were miniature compared to the Deinotherium.

This elephant-like creature had short tusks that grew from its lower jaw. A skull found in Germany in 1836 left no doubt that they exceeded the modern elephants in size and mass. The skull was 4 ft long and 3 ft wide. How the Deinotherium used its curious tusks is still in debate.

Enter ‘Super Croc’, the Mc Daddy of crocodiles and alligators. Sure, modern-day crocodiles are embodiments of the dinosaurs. But there was a time when the crocodiles were kings of the food chain. The Deinosuchus hunted and ate dinosaurs-not the ordinary catches-large dinosaurs. Potential proof of this came from fossils of an Albertosaurus and Appalachiosaurus. The specimen bear tooth marks that match the type of teeth Deinosuchus had. This means that the Super Croc once took one a living breathing tyrannosaurs, the apex predator of the Cretaceous North America

The crocodile measured up to 39 ft (i.e. 12 m), weighed close to 10 tonnes, and its jaws were studded with 6-inch teeth. How did it look? It pretty much resembled its today’s smaller relative-large mouth, huge jaws, crushing teeth, and came complete with the back armored with bone plates. The Deinosuchus probably hunted by ambush. It could be lying submerged near a shore, and violently seize large dinosaurs as they foraged amid the vegetation of ancient swamps and rivers.

The hippopotamus is today’s third largest land mammal, coming behind the elephant and rhino. It can weigh up to 1800 kg (4000 pounds). Turn the clock back 5-2 million years ago and you’ll greet its ancestor-the Hippopotamus gorgops. This prehistoric hippo was twice as big as its modern day relative. It measured up to 4.3 meters in length, had a shoulder weight of 2.1 meters and weighed 3900 kilograms!

It appeared first in Africa during the Miocene, migrated to Europe in the course of the early Pliocene and became extinct in the period preceding the Ice Age. Like today’s hippo, the Hippopotamus gorgops spent most of its time in and around water sources. The water helped it a great deal in lifting and moving that heavy bulk.

Picture the great white shark-6m long, weighs 500lbs, sends shivers down the spine of everything in the high seas. Now double that, and you have the ‘Big Tooth’, a.k.a, Megaladon. It was a bunch of mega-everything: from mega-teeth at 7.1 inches long to mega-length at up to 20m long. While the great white feeds on seals Megaladon fed on whales. If Megaladon still existed, chances are that man would never have got the guts to explore the deep waters. But you never know- somewhere below the ocean depths the great Titan may still be lurking, ready to return to the world. 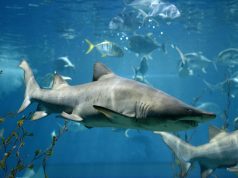