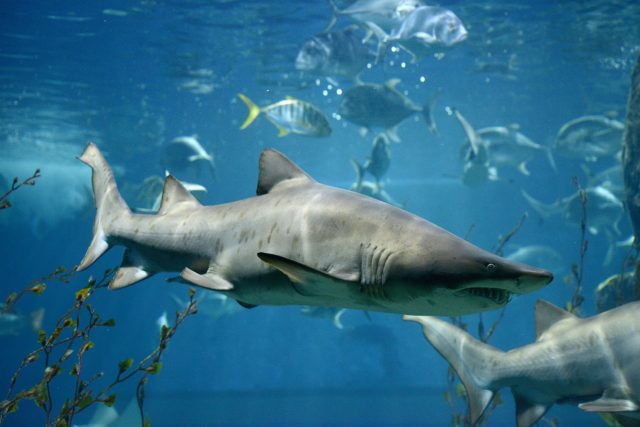 Upon the mention of sharks, the first thing that comes to our minds is ‘world’s most ferocious predators.’ Despite them being a nightmare of many, sharks are considered among the most fascinating creatures that there ever have been in the universe. But no matter how knowledgeable you may be about these creatures, it’s probable that you barely knew about these top 10 crazy facts about sharks:

Then, behind this row are other replacement rows of teeth (approximately seven). However, there are some species (such as the whale shark) which has over 50 extra rows. This ensures that once a tooth falls out, it gets replaced. In the case of the whale shark, it replaces its teeth every other week. Some of the other shark species replaces theirs after a month or after a couple of years. What’s more interesting about a shark’s teeth is that, they never get cavities. Now you know why these creatures are so good at attacking and tearing their prey.

9. Unlike most of the other animals that communicate through sound, a shark’s main form of communication is through body language.

This is why divers are asked to be observant of a shark’s body language as it can help them know what’s the sharks are thinking, or the situation at hand. For instance, when feeling uncomfortable, they tend to move in sharp movements, lower their pectoral fins and dive rapidly while touching the bottom of the sea.

But, when the unfortunate happens, the attack, or rather the biting only happens once. This is because once a shark takes a bite, it holds onto its prey for a few seconds and after realizing that its prey isn’t a sea creature, it lets it go.

6. There are two main ways through which a shark reproduces.

While some species give birth, others lay egg cases. At times, you can see these egg cases along the beach. Their reproduction levels are so high such that a single shark can give birth to 48 pups in one litter.

5. A shark’s immune system is highly similar to that of a human being.

However, it is a little more sophisticated. For instance, the reason why it’s so hard for a shark to dehydrate is because it has a significant amount of urea in its blood which enables it to remain hydrated even in the very salty waters.

4. Similarly to the sea turtles which return to the beach (where they normally hatch) to lay their eggs, sharks also tend to return to the places where they were born to give birth.

This is irrespective of how long it has been since they were born. It’s however worth noting that this trend is most common among the lemon sharks. Hence, it doesn’t apply to all shark species. It’s for this reason that people, especially researchers, are encouraged to preserve the shark’s local nursery habitats as a way of protecting the future generations

3. A shark can make up to a 2500 mile trip without having anything to eat.

How is this possible? Research shows that during this time, sharks use the fat stored in their livers as their main source of fuel. This fat accounts to as much as 25 percent of their total body weight. In addition to this, the sharks use the oil stored in the liver to increase their buoyancy.

2. Just like the adult shark that is capable of detecting the electric fields being emitted by a potential prey, a shark’s embryo is also able to do the same.

This applies to the embryos that are still inside a previously hatched egg. As such, whenever they detect potential threat, they freeze / become still so that they cannot be detected. They are able to pull this off by reducing their respiratory gill movements.

1. A shark’s family lineage is one of the most diverse in the world.

In fact, scientists estimate that there are as many as 500 shark species in existence. The smallest one measure about 6 inches long (the dwarf lantern sharks) while the largest can be measure up to 40 feet in length (the whale sharks). There also exist families of carpet, lantern, gulper, dogfish, bullhead, sleeper and angel sharks.

Others include the cat, weasel, mackerel, crocodile, hound and zebra sharks. The list is inexhaustible. And still, there are so many others that are yet to be discovered.