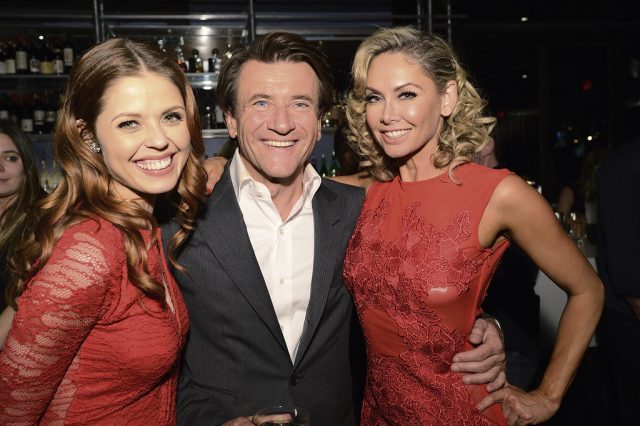 Robert Hervajec of Shark Tank fame confirmed that he & his wife of 25 years, Diane Plese, are getting divorced. The news come just before Robert Hervajec is to make his debut on the 20th Season of ABC’s Dancing with Stars on March 16th 2015 . The Croatian born Canadian entrepreneur is said to have made his massive fortune in cyber security industry and he 1st gained Television fame in the year 2006, when he actually starred in The Dragons Den, a Canadian version of The Shark Tank. The tycoon, who’s a contestant on new ABC’s Season 20 of Dancing With Stars, said that he and Plese, who have 2 daughters & a son, are now legally separated & they will be officially ending the marriage soon.

As the news of the marriage split with Plese broke, the businessman, 52 years of age, posted pictures of him in his private jet while flying from Los Angeles to New York city on business. Alongside him was the Dancing With Stars partner, Kym Johnson (an Australian Dancer), 38 years of age, and Robert captioned the snaps with the words “gotta rehearse somewhere!” The 52 year old reality TV personality was all smiles while giving his
DWTS co-partner Kym, a ride to the Hollywood dance studios in his luxurious convertible. By the look of Herjavec’s Twitter feed, it seems he’s keeping busy by prepping for the Dancing with Stars. In new season of the Dancing With Stars, Robert and the DWTS veteran, Kym, will compete against various celebrities including the Hunger Games star
by the name Willow Shield & partner Bark Ballas, Valentine Chmerkovskiy who is teamed with Rumer Willis, Suzanne Somers who is teamed with Tony Dovolani & Pattie LaBelle who is teamed with Artem Chigvintsev. Robert Herjavec revealed that 1 of the main reasons he actually signed for the TV show is because his mother (late) was a big fan of the show (DWTS). The TV show will premiere on March 16th2015, on ABC.

As the reality TV personality and entrepreneur has been basking in Hollywood’s limelight, his wife, Diane Plese, has stayed at the Canadian mansion with their children. It is not known what terms of the divorce settlement may be, but with Robert reported to be worth about $200 million, a new fresh start for this technology company boss isn’t going to be cheap.

These former love birds met when Robert went for a medical appointment at Diane Plese’s place of work, and according to the National Post, they had what is called “love at 1st sight”. According to the Daily Entertainment, the pair got married at a church in Mississauga, which is near Toronto.