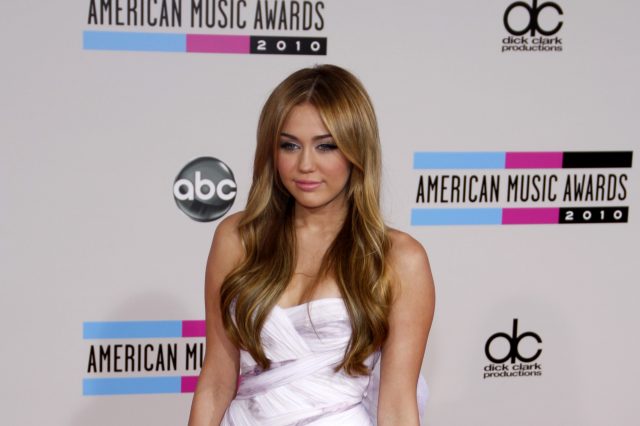 A few years ago, Miley Cyrus went from a sweet as candy Disney star, to something much darker! She does not seem to be letting up soon, as there’s more and more cringy moments coming from the star every single day. Let’s take a look back at Miley’s Most Uncomfortable Moments to date, the ones that made us want to hide behind a pillow as we inwardly cringed for her.

Not really a ‘moment’ but something that Miley wants to get out at every opportunity (especially when there’s a camera around) is her tongue. We all have tongues Miley, it’s nothing to write home about. It looks desperate, disgusting and down right trashy – not to mention uncomfortable for everybody who has to witness it!

She once had long luscious locks but cutting them was definitely the start of her downfall. She thinks her hair looks cool and edgy, when in fact she looks like Justin Biebers, butch sister! Do yourself a favor Miley and grow your hair back, it might return some of that sex appeal that you are obviously desperate to posses.

Twerking in a unicorn onesie

This happened a few years ago and was the first taste of her shocking performances. She showed off her newly shaved “quiff”, and twerked till she could twerk no more. Someone needs to tell Miley that an ass is really needed if you want to own a twek and her’s has similarities to a bald chicken.

Not only does Miley Cyrus use drugs, her favorite being “Puff the magic dragon”, she loves to boast about it. From “accidently” leaving spliffs around in her Instagram shots to candidly talking about her habit in interviews. She thinks her drug taking makes her cool and down with the kids, when in fact it just leaves people uncomfortable at her brashness.

From motorboating a girl’s ass in her “We can’t stop” video to kissing girls on stage and more, it’s clear that ‘Cyrus will do ANYTHING to get all eyes on her! We know you aren’t a lesbian girl, so stop acting that way to get the camera lenses clicking.