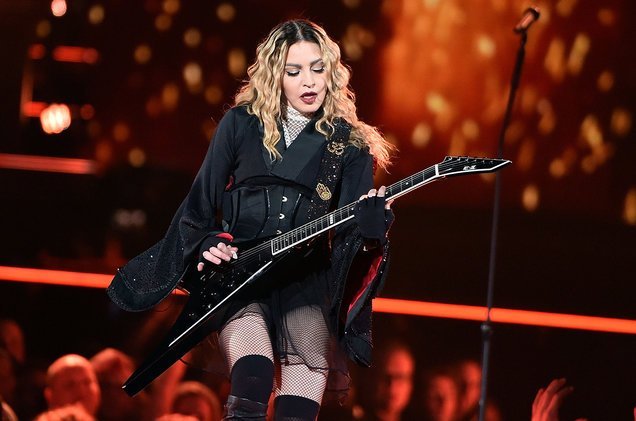 If you have seen any celebrity news lately, then you will have undoubtedly come across a story that involved Madonna falling backwards whilst on stage and performing at the Brit Music Awards in the UK. The fall in itself was pretty spectacular with her being pulled down some steps after a cape she was wearing failed to come off in the correct manner.

A slightly bruised ego, and probably a bruised something else, but ever the professional it was not long until she was back on her feet singing away.

So Why Is Georgio Armani Involved And Why Is Madonna To Blame?

First, Armani made the cape and he has been quick to absolve himself of all blame for the incident. It was not a case of the cape itself malfunctioning, but he has been stated by the Association Press as saying that Madonna is to blame because she is just so difficult to deal with. This is certainly something that is backed up by previous examples of where Madonna has been a difficult client, so one does end up having some sympathy for Armani even though he clearly has no sympathy for Madonna.

Initially, he says that the cape had a hook, which would be nice and easy to undo at the correct time. However, Madonna decided in her eternal wisdom that she preferred a tie, so it was altered to fit in with her needs. The problem here was that it was tied too tight and indeed just prior to the incident it is obvious that Madonna was struggling to undo it to then allow it to be pulled off.

Well, according to Madonna herself, who appeared on a UK TV show the day after, she had to choose between either being strangled or to be pulled backwards so obviously she chose to fall. You can understand why Georgio Armani has acted so quickly in making it known that his design was not to blame because this was a fall that really did set Twitter alight and you can guarantee that it has been shown countless times both on the Internet as well as news channels around the world.

It would have also been mentioned that it was designed by Armani himself, and a wardrobe malfunction of this magnitude would certainly not have helped his marketing in a positive way. He did all that he could do by basically coming out fighting and making it known that Madonna caused it herself.