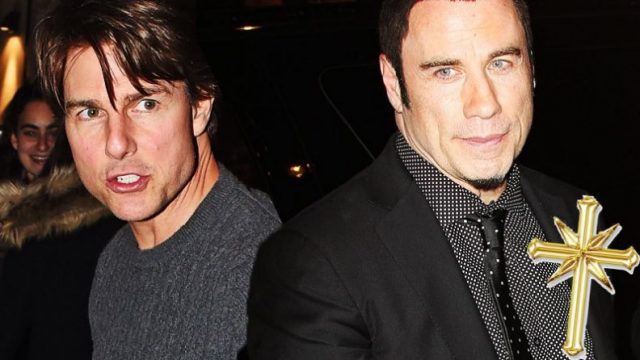 When it comes to Scientology, perhaps their highest profile members has to be John Travolta and Tom Cruise. So, when the knives are out for the religion it is not exactly a surprise to discover that the two of them jump to its defense. After all, when they comment on something it is repeated on media outlets around the world and instantly gives the religion a huge amount of exposure.

So Why Are They Defending Scientology Right Now?

This all stems from a documentary on the religion that has made claims that Scientology were responsible for wire tapping the phone line of Nicole Kidman and indeed set about organizing the end of their marriage. Why? Well, the program states that in the mid 90’s Kidman had managed to convince Cruise to move away from the church and this, in turn, appeared to upset those at the top. It ultimately led, apparently, to the church leader setting in motion a plan to split the couple up in an attempt to keep Cruise in the church due to the exposure that he could get them.

It Seems To Have Gone Further. However, even though listening in is bad enough, it is also apparently the case that they followed Cruise, took their children and did some re-education so that they would reject their mother and opt for the church, and to help Cruise claim custody of them once the divorce was finalized. In other words, the claims are that the church completely manipulated the marriage between Cruise and Kidman and that is some pretty hair-raising stuff.

So Why Are They Jumping To Its Defense?

You have to remember that the claims led to an open letter to both Travolta and Cruise to speak out about the church and to refute or admit to the claims. Of course the spokesperson for the church has already stated that it is biased and completely untrue, but these two guys are the media face of the entire organization, so the church needs them to stand up to the claims or else the entire church could be at risk of crumbling down.

What Will Be The Outcome?

The fact that both of them defend the church does show you the stranglehold that it has on its members. However, people will make up their mind about the church depending upon which side of the fence they sit on and this will just be another thing that will strengthen the thoughts and beliefs that an individual has about Scientology. They will either rebel against it, or believe the word of two of the biggest name actors in the world today.