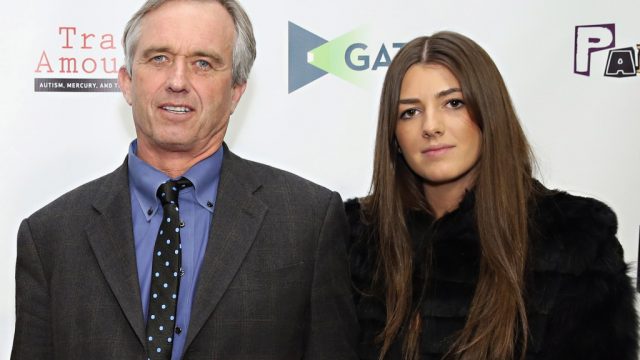 You might be aware that radio host and public speaker, Robert Kennedy Jr has a beautiful 19 year old daughter named Kyra. She, like most young girls her age – is eager to grow up and showed that during a recent night out. Not content with waiting a couple of years to hit the party scene, Kyra Kennedy recently tried to enter a New York nightclub with her big sister, “Kick'” ID.

When she was refused entry, she used that famous celebrity line, “Don’t you know who I am?” Finishing it off articulately with, “I’m a Kennedy, Google me!” Her angry outburst was made even worse because it was blatantly obvious to everyone around her, that she was highly intoxicated and not making her situation any better. The club that she reportedly trying to enter was “Lava” which is in the Turning Stone Resort Casino in Verona, New York.

Onlookers to the entertaining scene said that Kyra gave the security guard her sister’s ID, to which they promptly asked her what her date of birth was. She clearly didn’t know and not so subtly tried to look it up on Wikipedia, after a long awkward pause! The security guard not only refused her entry, but he would not give the passport back either.

This sent an already irate Kyra on even more of a tangent, which was when she thought her somewhat celebrity status might make him change his mind. In addition to telling the guard she was a Kennedy, she also said “If you don’t let me in, the governor will be calling.” This didn’t work and she promptly left the club and returned to the hotel front desk, claiming she would sue if her sister’s passport was not returned.

After much reasoning, a sulky Miss. Kennedy soon returned to her hotel room while the rest of her group, went on to party. Oh Kyra, The perils of being young! She was returned her sister’s passport the next day, when it was left at the reception of the hotel for her to collect by the understanding security guard.

The event happened, when Kyra Kennedy was on a weekend of partying and pampering with her socialite friends including Andrew Warren, Julia Moshy and Gaia Matisse. Kyra has refused to comment on the incident but we have a feeling, she won’t be trying anything like that anytime soon! Perhaps it’s best not to visit Lava again Kyra, or maybe quit partying all together until you hit the legal age to drink.