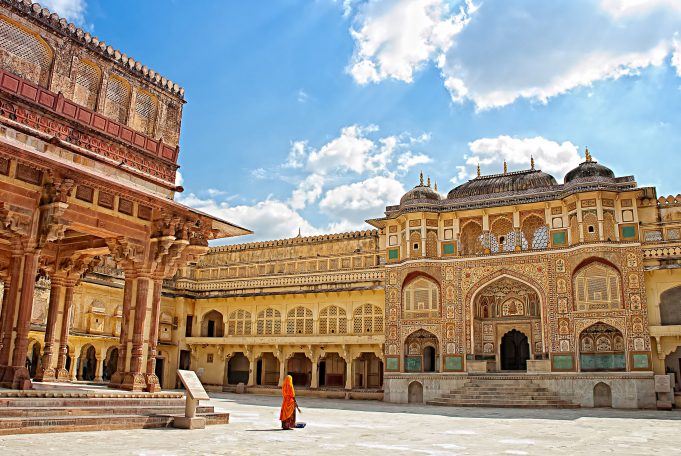 India is a popular travel destination, attracting millions of tourists with her stunning natural beauty, blend of cultures, and beautiful artifacts from her glorious past. The best time to visit India is November to March. After March, the Indian summer begins, and before November, the monsoon showers are prevalent across the country. Planning to visit India?

Here are the 9 must-see landmarks in India

Constructed in the 17th century, the Taj Mahal is an instantly recognizable landmark of India. When Shah Jahan, the fifth Mughal Emperor of India, lost his favorite wife, Mumtaz Mahal, he had this glorious structure built in her honor.

Built in the 1500s, this nice temple contains the Sikh holy script – the Guru Granthsahib. It is the most spiritual edifice for Sikhism and a marvel to behold for other faiths. The design of this great temple incorporated symbolic tolerance, acceptance and respect towards other faiths, by constructing four doors to signify the openness of Sikhism.

Lying in the Ganges Delta, the Sundarbans is the world’s largest mangrove forest. It is known for its population of Bengal tigers. A UNESCO World Heritage Site, this forest houses the Sundarbans National Park. Its alluring natural beauty and the thrill of seeing the largest big cat can make a perfect holiday.

Khardung La is one of the world’s highest roads accessible by vehicles. The road leads to the scenic Nubra Valley and is an ideal place for the adventurers, motorcyclists, and even photographers.

The Qutb Complex is a collection of many historic monuments built for different purposes across many centuries by various rulers. It houses the Qutb Minar and the Iron Pillar. The Qutb Minar is the world’s tallest brick minaret and was built in 1192. The Iron Pillar is a metallurgical marvel believed to be over 1,500 years old.

These islands are a major tourist spot, thanks to their stunning beaches and the many artifacts from the British rule. The best beaches include Havelock Island, Port Blair and Jolly Buoy Island.

The cities of Bikaner and Jaisalmer, located in the middle of the desert, are some the most popular tourist spots in Rajasthan. They are known for their buzzing markets. You can enjoy the desert itself through bonfire nights and camel rides.

India has something for everyone, from the nature lover, and trekker to the history buff. Visit some or all of the aforementioned landmarks and you will definitely fall in love with this country.