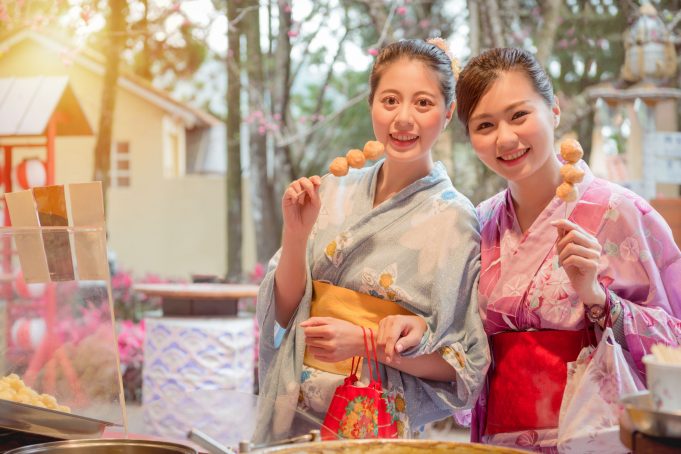 If you’re thinking of “sushi” every time you hear Japanese dining, then you should know better– it’s more than that. Think of creativity, unusual dishes ranging from the world’s finest beef to the most deadliest sea creatures. Though, that’s not it, and we’re here to enlighten you even more.

Presenting the 3 incredible dining experiences you must try in Japan.

Once the city goes down, this doesn’t mean that the day is over. In fact, it’s the opposite in Japan, especially in Osaka’s Dotonbori district. This area would show you how bright and kitschy Japan can be. Likewise, this is also considered to be the most ideal place to try two of Osakan specialties that most locals and travelers alike are talking about– the okonomiyaki and takoyaki. The Okonomiyaki is a type of pancake, but not just your regular pancake; it’s filled with a variety of fillings that you haven’t even thought of putting in your breakfast treat. On the other hand, the takayoki is fried octopus balls that are topped with various, tasty, and mouth-watering topics. These foods could be enjoyed even when you’re on the go. You could grab them and take a stroll around Dotonbori, enjoying the sights and whatever you could lay your eyes on. For those who are looking for adventure and could be quite daring, you could also try the “fugu.” It’s a type of pufferfish that’s considered to be poisonous and could instantly kill the victim if it was prepared carelessly. If you’re interested, it wouldn’t be hard to find the restaus that serve this. Just look for the giant papier mache pufferfish and it’ll bring you there.

Perhaps, you’re also wondering what makes Japanese food unique, one of a kind, and truly special. Allow us to answer that question. It’s how the Japanese people treat all food with utmost care and respect. This applies even on fast food and budget meals. Unlike in other countries, in Japan, you could enjoy something that’s good and filling for less than $12. You could start by slurping an authentic ramen– a very delicious noodle soup that’s filled with anything you could imagine and it’s very different from the instant noodles you used to eat way back in college. You could also try the donburi– a bowl of meat or fish that’s served over steamed rice. Then, there’s the Japanese curry which is slightly more delicate as compared to the Indian version. Though, if you’re missing the traditional burgers, then no need to feel the longing for it– you could go or a teriyaki burger! Lastly, if you’re on the go, there’s always a bento box ready to be served on train stations.

“Kaiten-Sushi” is the conveyor belt sushi that’s quite common, especially in the Japanese casual-dining. Likewise, even though the sushi being served isn’t the highest quality, you could still enjoy the fun factor the conveyor belt could offer. Basically, the plates of sushi are carried out on a conveyor belt and all you need to do is take the ones which you like best. At the end of the meal, you’ll be charged depending on the number and color of the empty plates you’ve collected. This is the traditional setting, but there are also some hightech places that offer more options. For instance, you could place an order of a la cart on touchscreens and the dishes would be delivered to you, as fast as it would with a conveyor belt and you’d be congratulated by tiny manga characters on your screen.