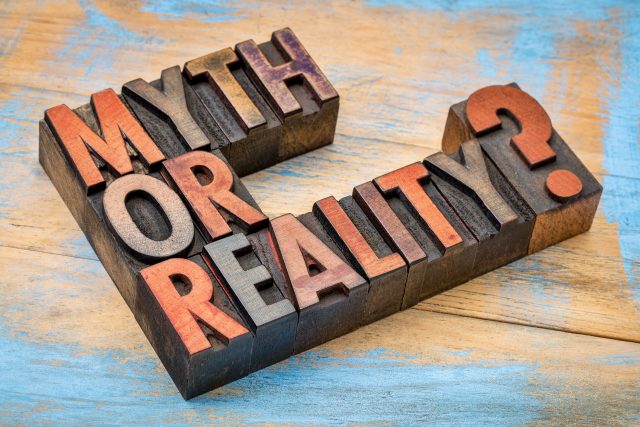 Ever since people started talking to each other, they also started exaggerating the truth for the sake of creating entertaining conversations. While some stretched the truth others completely made stuff up just so that they can astound and awe their friends. As time went by people started to believe some of these exaggerations and lies as they slowly became household truths. Think about it, someone back in the day must have said ”The Earth is flat, I have seen it” scaring travelers for ages that they might fall off the edge. No one cared to investigate, they just passed the information along, until finally it was proven wrong by a bunch of other people. Sadly there are many such myths that stood the test of time and are still believed by many. In order to jolt you back to reality, here are the 10 most popular myths debunked.

It might be the biggest and longest man made structure ever to be created but that still doesn’t make it visible from space. People who have never been to space have been spreading this rumor for some time now. Some even claim that it’s visible from the moon. This myth became popular after it was featured in a cartoon by Ripley’s Believe It Or Not back in 1932. The truth is however nor the wall or any part of it can be spotted from space.

(Myth-2) MOST BATS ARE BLIND OR HAVE VERY POOR VISION

If you think that bats are blind and the only way they is see using echolocation then it’s time to come out of the dark. In fact most bat have a pretty good eyesight, some bats like the fruit bat have full-color sight which can be compared to the human vision. Bat’s eyes are naturally tuned to low light conditions helping them see well in the dark.

Deleting a file from the recycle bin only frees up the space the file took. Bits of information still lurk around in the hard drive and can even be recovered using special software.

(Myth-4) A GLASS OF WINE AT DINNER EQUALS BETTER SLEEP

It’s a common belief that a glass of wine before bedtime gives you sound and undisturbed sleep. This couldn’t be further from the truth as alcohol can cause you to feel restless waking you up constantly throughout the night. This is why it’s best to avoid any kind of alcoholic drink just before hitting the bed.

(Myth-5) SPACE HAS NO GRAVITY

This might be an absolute shocker but yes there is gravity in space. How do you think Earth, Pluto, Mars or any planet stays in an orbit? That’s because they are restricted by the gravity of the sun. The sun itself is affected by gravitational pull of other bodies and is able to hold its position in the milky way galaxy.

This is probably the most common myth on our list and is dead wrong. Lightening can pretty much strike anywhere depending on the correct weather conditions. In fact, if you think about it you’ll know that it’s a mathematical impossibility. Lightening has been striking the surface of this planet for hundreds of billions of years and if this was a fact they would have exhausted all the places they could strike on.

Fat is an essential nutrient that has a multitude of different functions in our bodies. It gives us energy, helps produce essential hormones, and rebuilds cells. Therefore, going completely fat free is unhealthy and can even get you hospitalized.

(Myth-8) CHAMELEONS CHANGE COLOR TO CAMOUFLAGE THEMSELVES AGAINST PREDATORS

Chameleons are cool animals, they can change their body color, imagine you being able to do that. However, they don’t change color to blend in to the surrounding environment. The color changing in fact is a way of communicating how they are feeling. Hey maybe that’s where the phrase ‘feeling blue’ comes from.

(Myth-9) MT. EVEREST IS TALLEST MOUNTAIN IN THE WORLD

When measured from base to peak Mt. Everest is not the tallest mountain in the world. In fact it doesn’t even come close. When measured base to summit, Mt. Mauna Kea situated in Hawaii is 10,200 meters tall dwarfing the Everest’s 8848 meter height. However, most of Mauna Kea’s enormous height is submerged under the sea making it look much shorter than it actually is

It might be a nasty habit but it does not increase the risk of arthritis. The sound comes from the sudden release of trapped gas between the joints and is in no way related to arthritis. Annoyed by this habit, maybe someone back in the day said it just to stop someone from cracking their knuckles.